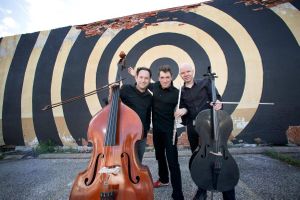 The season finale of the Masterworks series features three pieces that are departures from convention. PROJECT Trio, who electrified audiences with their January 2018 KSO debut and whose performances have been hailed in the press as “packed with musicianship, joy and surprise,” return for a concerto written especially for them by dynamic young American composer Chris Rogerson. The concert continues with Berlioz’s fiery Symphonie fantastique, a spectacle in its time, written as a performative declaration of love to a Shakespearean actress the composer knew. The evening concludes with “Dance of the Seven Veils” by composer R. Strauss, a piece inspired by the opera Salome, known similarly for its themes of passion and obsession. R. STRAUSS: Salome’s “Dance of the Seven Veils” ROGERSON: PROJECT Trio co-commission BERLIOZ: Symphonie fantastique